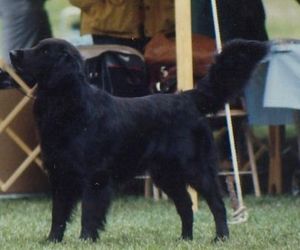 Stoney is a legend in the Flat Coat breed. He exemplifies the true multi-purpose nature of the breed. He finished his breed Championship easily before his first birthday and continued to receive group placements until he was over 12 years old. He was a great show dog but his first love was working.  He attained his obedience titles with style and placements (and not to mention a few good laughs). His ability in the field was nothing less than awe inspiring. Not only was Stoney a great hunting test dog (Master Hunter, who qualified in the first AKC Master Hunter Invitational...predecessor to the AKC Master National) ...he was a perfect hunting companion who possessed style, enthusiasm and as much talent as any dog I've seen. He achieved the FCRSA Hall of Fame entirely on his own merits without any "get" points.
The mark of great producing sire is producing pups of the highest quality. Stoney certainly met this standard. Stoney pups excel in the field, in the obedience ring and in the show ring. He produced numerous titled offspring and Hall of Fame dogs. He passed on his incredible desire and drive to his offspring.
More than an outstanding producer, Stoney was a friend and hunting companion whose mischief and antics kept you laughing and his talent kept you in awe. Stoney stayed with us for nearly 13 years and will be forever in our hearts. We have a very limited amount of frozen semen available to very select bitches.

Since Stoney died before Elbows and Patellas were routinely checked. A letter from the veterinarian who knew Stoney is available.

Click HERE for a sample stud contract for Stoney . Stud contracts will vary somewhat according to the bitch.